Millenia is a great place to live, thanks to the variety of stores, restaurants, and amenities in and around this highly walkable community. But sometimes you have to leave, whether it’s for work or play, so it’s good to understand the Chula Vista to downtown San Diego commute! There are several different ways to travel between Millenia and San Diego, so you have options to choose from when you’re commuting to the city.

What’s the Chula Vista to San Diego Commute Like?

It’s around 20 miles from Millenia to downtown San Diego. If you’re driving, there are several routes to travel between the two locations:

As with most cities, San Diego commute times vary widely, depending on the day and time of day, as well as the route you take.

Note: State Route 125 (SR 125, or the South Bay Expressway) is a toll road, which can be paid by FasTrak electronic toll collection or by cash or credit card. You’ll likely save money if you have a FasTrak; drivers are charged a prorated toll based on the distance they traveled. Tolls for FasTrak users range from $0.50 to $2.75. If you pay with a credit card or cash, you’ll be charged a flat rate depending on which toll booth you passed through. Tolls for FasTrak users range from $2.00 to $3.50.

Millenia to San Diego by Car

On a weekday morning, it can take between 30 and 60 minutes to make the Chula Vista to San Diego commute. Morning rush hour starts early. By 6 AM, all five routes are starting to slow down. At this point, the average commute can take up to 40 minutes, with the toll-free route via the I-5 taking up to an hour. This happens because the I-5 tends to get congested early, with traffic from nearby Chula Vista and National City. The congestion gradually increases over the next couple of hours. If you leave Millenia at 6:30 AM, your commute via any of the five routes may take up to an hour. If you leave between 7 AM and 8 AM, you could be in traffic for 75 minutes. 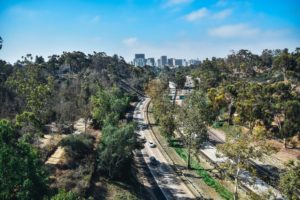 San Diego to Millenia by Car

When you’re traveling from the city back home to Millenia, your commute is 20 to 30 minutes for most of the day, with the exception of the I-5 toll-free route, which may take a little longer. By mid-afternoon, all five routes slow down.

The I-5 routes typically slow first, between 2 and 3 PM. On particularly busy days, the I-5 toll-free route may be slow before 1 PM. This is mainly because this route moves through both National City and Chula Vista, two busy cities in their own right.

By 3 o’clock, the SR 125/SR 54 is getting sluggish too, followed by the SR 94/SR 125. By 3 PM, the commute is 35 to 50 minutes, with the I-5 route being the most congested. Between 4 and 6 PM, the San Diego to Chula Vista commute via any of the routes can take an hour or a little more. The exception is the I-5 toll-free route, which can spike to 80 minutes in peak rush-hour traffic.

Once the rush period is over, the commute time quickly drops back to its usual 20 to 30 minutes on all three routes.

The Best Routes to Get You There On Time

So, what’s the best driving route to take for your Chula Vista to San Diego commute? If you’re not traveling during rush hour, then opt for any of the three routes that’s most convenient to you. During the busiest times, it’s better to be more selective!

Millenia to the city of San Diego: In the busy period between 6 and 8:30AM and 6 PM, all routes can take an hour or more. Of your options, SR 125 toll road/SR 94 is usually the fastest. By choosing SR 125/SR 94 over the others, you can reduce your average commute by up to 10 minutes.

In both directions, you’ll typically find that toll routes are a little faster than toll-free routes, but the difference is usually only a couple of minutes. However, the toll-free I-5 route is prone to congestion, and you may find yourself with a long commute any time of the day.

What Are the Best Times to Travel?

On weekdays you’ll get the best San Diego commute times if you avoid traveling during rush hour.

When you’re heading home from San Diego to Millenia, traffic starts to slow down after 2 PM. You’ll want to avoid traveling between 4 and 6 PM to get the best commute time.

When you live in Millenia, driving isn’t the only way to get to San Diego! You have other options for those times when you’d rather leave the car at home. 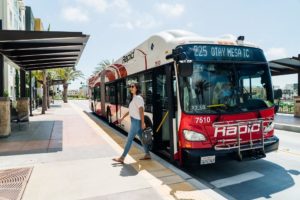 The new rapid transit bus service launched in 2019, with the opening of Millenia Station. Located between Orion Avenue and Solstice Avenue, the new station is only a few minutes’ walk from all Millenia neighborhoods.

The South Bay Rapid Transit service travels between the Otay Mesa Transit Center and San Diego, with stops in Chula Vista and National City, as well as Millenia and Otay Ranch. This route is called the 225 and takes around 50 minutes to travel between Millenia and San Diego. Buses stop at Millenia Station between the hours of 4:30 AM and 12 PM. During rush hours (5:30-10:30 AM and 2-8 PM), buses are every 15 minutes. Outside of rush hours and on weekends, they come every 30 minutes.

The 225 terminates at Broadway & 4th Avenue in downtown San Diego. For the return trip back to Millenia, you’ll catch the 225 at Broadway & 5th Avenue.

During rush hour, the commute can take a little over an hour. If you need to commute to San Diego and prefer not to travel by car, this is a great option!

Living in Millenia Makes Travel More Convenient than Ever!

Millenia gives you the freedom of living in a walkable neighborhood combined with the convenience of easy commuting to San Diego.  The SR 125 toll road is just a minute or two away, so it’s easy to hop on the expressway and head into the city. There are toll-free routes that will get you there too! And thanks to South Bay Rapid Transit service, you don’t need a car to live in Chula Vista and still enjoy easy access to San Diego. With buses every 30 minutes at Millenia Station, it’s never been easier to get to the city and enjoy everything it has to offer.